The Difference Between Mistakes and Poor Choices... 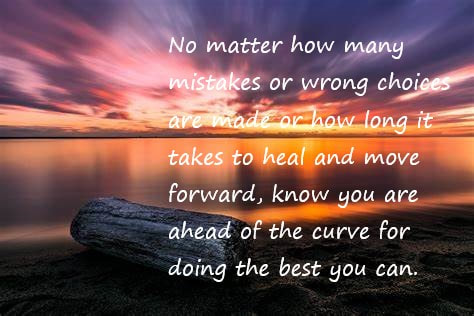 In my profession of being a counselor, I often hear these two terms become misused or simply… misunderstood. Yet, it is important for us to know such differences if we desire to grow, align and heal fully.

A “Mistake” means to enter into something with the purest of intentions of doing the right thing, but having it not work for the highest good for self or for others as we hoped or intended.
Example: A person wanted to increase their financial portfolio and trusted an investment broker to guide them into the safest prospects with the best financial growth potential. After believing and trusting that the broker gave them all the facts, they invest their money for a more lucrative and better future, only to learn in the end they lost money VS. gained. This becomes a mistake as they trusted and believed they were making the right choice through honest means with information given to them.

Another Example: A person offers their gifts and abilities as a repairman to help another person repair their stove, as this repairman knows the person owning the stove didn’t have the financial means to pay for the cost of repairs or replacements themselves. Yet, despite the repairman’s best efforts to allow their abilities to be of assistance, they accidentally broke something in the process of such repairs, making the problems worse, not better. A simple, yet honest mistake.

A “Poor Choice” is one who enters into a situation knowing in their heart of hearts it was wrong to do so or would be deceitful in some way, yet chooses to do so anyways for means of pleasure or gains.

Example: A person is unhappy in their relationship, instead of trying to repair the relationship or perhaps having tried to repair the relationship without success and not having ended those types of relationships, they find themselves in the position to be with another person in an affair or fling. Knowing this could potentially hurt their relationship and their own credibility, they enter into this knowingly. This is no longer a “Mistake”. This is now a Poor Choice.
Another Example: A person wants so badly to turn their desired manifestations into reality. Now they know deep down, if they waited the right and proper opportunity would come along. Yet, they see a chance to make something happen now, knowingly in their heart of hearts something didn’t seem quite right about this opportunity or that it was not the right time… yet they followed through with it anyways ignoring their gut instinct/intuition having discovered it didn’t work out as well as hoped or planned. This again is no longer a “Mistake” but rather a Poor Choice.

With this understanding between the two, let it also be known that just like with anything else in life… all still happens as it does for a reason… for us to learn and grow from. To rise above such experiences and become better in such understandings. Now, the difference here is we can tell those who are emotionally and perhaps too more mentally mature as such souls are willing to acknowledge either case and admit they made such choices but have grown or are still continuing to learn and willing to grow from such experiences. Bravo and good for you! Keep up the good work!

Yet, there are other souls who are struggling and have yet to align with such maturity or willingness to admit such experiences were made or to refuse to acknowledge that a “mistake” was actually a poor choice; taking responsibility for their actions.

In this, it is important not only for ourselves to be able to recognize the difference, but to also be willing to acknowledge such experiences. For refusing to do so, not only holds you back from living your fullest potentials, but it also prevents others who are wholly aware of such differences in being able to see you in a healthy light as well. For no one can be expected to trust or believe in you when you, yourselves, are not willing to see and admit yourself in the right light.

For those who are struggling to admit a mistake or poor choice has been made, you need to remember, we ALL have at one point or another experienced one or both… not just once… but perhaps several times over during the course of our lives. There is no blame or shame… but rather experiences to gain from and become more aligned and healthier in our choices as we move on. That’s how we learn. That’s how we grow and mature. Yet, the only time blame or shame enters and stays in the picture is placed solely upon yourselves when you allow the guilt, regret or perhaps opportunities come into alignment to help you grow and move on from such experiences and be held back by them or not take those opportune steps to grow and move on… only to replay them again and again.

For those struggling to move on from such experiences, there is help available to you. For often times there are other areas in our lives which hold us back from wanting to see or admit the truth to ourselves. Perhaps, for some, you are being held back from healing and being able to move on. For to heal and move on allows one to be truly free from the experience. Yet, guilt may hold you back in fear or create false perceptions you are not worthy of such healing.

Much love and light always
Melissa